Here's Izzy! She's four years old and weighs around five pounds. She never had a name before. Her former owner, who passed away, used to just whistle when he wanted to call her. His family couldn't keep her and she was given up to a rescue organization on New Year's Eve. But although nameless, she was loved and for a dog whose life has been in transition she's a pretty trusting girl.
Izzy 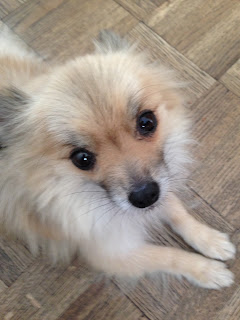 I missed Mitzy so much after she passed away. I knew I wanted another dog just like her, but after days spent looking on various rescue sites online, none of the dogs really clicked for me. Until I saw this little nugget on a site that came up using different search keywords. Not only did she look like Mitzy, but her personality description was exactly what I was looking for: sweet, cuddly, friendly, and female. I've had mainly male dogs all my life, Yorkies who would look me in the eye defiantly as they lifted their leg on my drapes while I repeated for the umpteenth time for them to go outside. Mitzy was my first female in a long time and I was shocked to discover her dainty ways. She groomed herself fastidiously, always went outside to relieve herself (like a good girl), and stretched like a ballerina doing barre exercises. She didn't gobble treats in one gulp but would take them back to her lair (aka her bed) to savor them and nibble on them a bit at a time. I'm happy to report Izzy is well on the way to fulfilling my dream of another dainty damsel. We haven't mastered the housebreaking thing just yet, but we are having more and more success every day. She so likes to please us.
Izzy is a miniature version of Mitzy who weighed 15 pounds. 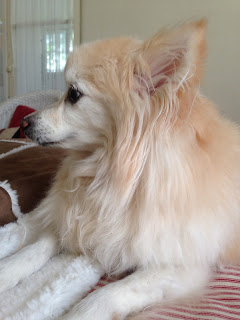 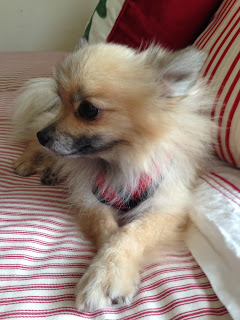 Now that you've been introduced to Izzy, the next few posts will document her first two weeks with us, which will cover her escape artist skills and adventures when my husband watched her for six days while I was out of town, aka "the feral days."
Posted by Judith Gonda at 6:39 PM

Murder in the Secret Maze

Landscape architect Tory Benning knows the lay of the land, but she’ll have to dig through the clues to unearth a killer . . .

After a whirlwind romance and a glorious wedding at the luxurious Hotel Santa Sofia, Tory Benning is ready to let down her hair, slip into her dancing shoes, and celebrate—until she discovers that her newly minted husband has vanished. The police suspect cold feet and second thoughts are behind Milo’s disappearance, but Tory’s certain he’s met with foul play. And since she designed the plush resort, she knows every nook and cranny of the grounds and adjoining secret maze, and wastes no time delving into her search.

As clues begin to emerge that Milo may have taken his last breath in the maze, Tory steps up her sleuthing, even as she learns she’s the prime suspect of a cop with a chip on his shoulder and is squarely in the sights of a menacing stalker. And when a second body is found on the grounds, Tory fears she’s up against a killer determined to silence any and all who get in the way.

Not to be deterred, Tory forges ahead, navigating a case with more twists and turns than the maze itself, until the labyrinth of clues leads her to shocking revelations about her husband, her family, and the identity of a killer who’s dead set on making her the next victim . . .

Feeling she’s too old to become a ballerina or a rock star, empty-nester psychologist Kendra Madison decides to put her research skills to good use solving crime so she volunteers for the LAPD. But she finds she doesn't need to go any further than her own backyard to spice up her ho-hum life when her husband Mark, a University of Southern California dean, becomes the prime suspect in the murders of two of his fellow deans. Kendra embarks on a quest to prove Mark's innocence, leading her all over Los Angeles, from the ritzy enclaves of the Westside to the grittier hoods near the USC campus. Alternately channeling Bridget Jones and Homeland's Carrie Mathison, Kendra eliminates red herrings one by one. Along the way she stumbles upon a university coverup and scandal that could rock USC to its very core. But even worse, the more clues she discovers, the more she wonders whether her husband might be guilty after all.

Judith Gonda
I'm a mystery writer and a psychologist. I was trained as a developmental psychologist at the University of Wisconsin-Madison and continued my education as a postdoctoral fellow at the University of Southern California where I also taught and worked as a research associate and met my husband, an architect and professor, there. We moved to Champaign-Urbana where I was an assistant professor at the University of Illinois. I moved back to LA to work as a jury consultant at a leading litigation consulting firm before opening my own jury consulting firm with a colleague. My passion has always been figuring out what makes people tick, whether through conducting psychological research, applying psychology to legal issues, or examining motives and relationships in writing my mystery novels. I have two adult daughters, one a landscape architect and interior designer and the other a screenwriter and producer and two rescue Pomeranians, a.k.a. daughter surrogates, named Izzy (the peppy one who looks like a fox) and Sophie (the lethargic one who looks like a bear). All provide inspiration for my stories. I'm represented by Dawn Dowdle, Blue Ridge Literary Agency.